A Brief History of the SCGC

A Brief History of the SCGC

In the early 1990's SCGC had a quarterly production called "SCGC Accolades". Attached to this article is the Fall 1990 edition which includes a brief history of the Southeastern Color Guard Circuit!

Check out a scanned copy of the original by clicking the link above. A retyped version also follows.

The History of The SCGC, First Decade

I had planned to write a very factual history of the SCGC, but after much thought, realized that would be next-to impossible and would probably develop into a boring article as well. Instead, I contacted several people mentioned in this article to use as sources and combined that with how one person was affected by participation in the SCGC. One evening in 1971 at a Shoney's Restaurant in Birmingham, Alabama, the SCGC was formed by Doug Noel, John Armstrong, Frank Godfrey and Jim Gladson. These men patterned after an exciting idea from the Midwestern United States, The Midwest Colorguard Circuit. At that time, the units were judged in General Effect, Marching and Maneuvering, and Timing and Penalty. The "tick" system was used to subtract errors from the M & M. Each unit had to perform to the cadence of their marching. Also, each unit was required to execute two of the following moves which were based on American Flag codes of the VFW and American Legion.
Pass and Review -"units pass through an area 12 feet of the center line in a company front with each member executing eyes right and rendering the proper salute."
Post and Retrieve Colors -"units must post and retrieve all flags using flag stands and set-up of its own design. Other maneuvers may be done at this time but there is a maximum of 60 seconds."
Presentation of Colors -"units must pay respect to our National Color by halting facing the GE side with all members rendering the proper salute, highlighting the U.S. Flag."
In 1972, the first guards were the Jones Valley High School Rangers of Birmingham, directed by Doug Noel, Talledega High School directed by Frank Godfrey, Cordova High School directed by John Armstrong, Tate High School of Gonzalez, Florida, directed by Mike Strasser, and a guard from Alabama Christian College. In the first Championship, held at Alabama Christian College, the winner was Cordova High School.
In the first years of the SCGC winners included
Past Champions


In 1974 the rules were changed to allow guards to also be accompanied by live instrumentation (drums) in addition to their marching cadence.
Though I did not begin the circuit until 1975, I remember that Cordova High School's 1973 & 74 guards, the Coronets and the Imperials, were fierce competitors with the Golden Eagles, the Handleyans, and Decorum of Fairfield, Alabama. The Golden Eagles were noted for their excellent rifle lines and even placed at Midwest Finals. The Golden Eagles were also used in a demonstration film produced by the Midwest Colorguard Circuit. Decorum, in purple hot pants jumpsuits with the cross-style white belting and holsters, were noted for their exceptionally high mark time and ease of execution.
Decorum patterned their uniforms after the Blue Stars Drum Corps. Decorum won High M & M in 1974. My sister, a marching member of the Coronets, remembers standing at attention for five minutes (she swears) waiting on the judges' cue to begin their championship performance. (The Coronets placed first runner-up to the Golden Eagles, as a result of this nerve-wracking experience). Rules were later added to permit a guard to exit and re-enter in such cases. In 1974, the circuit was divided into two classes. Also interesting to the circuit were the Thunderbolts of New Orleans, Louisiana. This all black unit was sponsored by the Police League of their city.
In 1975, the circuit grew to include Alabama guards such as The Southern Lancers from Jacksonville State, the Hokes Bluff Raiders, Emma Sansom High School Rebels, The Pirates of Boaz,and the Emerald Knights and Imperials of Cordova. From Georgia came guards such as The Blue Eagles of South Cobb and The Catamounts of Dalton High School. From Louisiana came the Los Cumancheros and Dimensions of New Orleans, and the L' Acadiennes of Lafayette.

From Florida came the Miami Silhouettes, Chargers, and the Devil Dogs of Clearwater. From Tennessee came the Blue Devils of Erwin High School. Unique to the circuit that year were the two all-male guards, the Emerald Knights and Los Cumancheros. Adopting the look from the drum corps by the same name, The Emerald Knights wore green pants with red satin shirts and marched out entertaining rhythms such as "The Big Bad Wolf" and "Pop Goes The Weasel". Los Cumancheros were unique in their Spanish bullfighter uniforms and their use of a trumpet fanfare and percussion accompaniment. I also remember that Tate wore black hot pants, white blouses, and red vests. Tate's uni form was finished off with white knee-high majorette boots th at were quite in fashion at the time. We were also impressed that Tate had two guards from the same school! One of the most intimidating groups for the year was the Silhouettes of Miami. Coming also from the drum corps by the same name, the Silhouettes wore orange and green uniforms and short white majorette boots. The excellence of mark time displayed by the Silhouettes was thunderous and frightened many competitors into lower scores by comparison. The Silhouettes brought out the innovative use of 5 foot flag poles, while all of the other groups were still using eight foot poles! 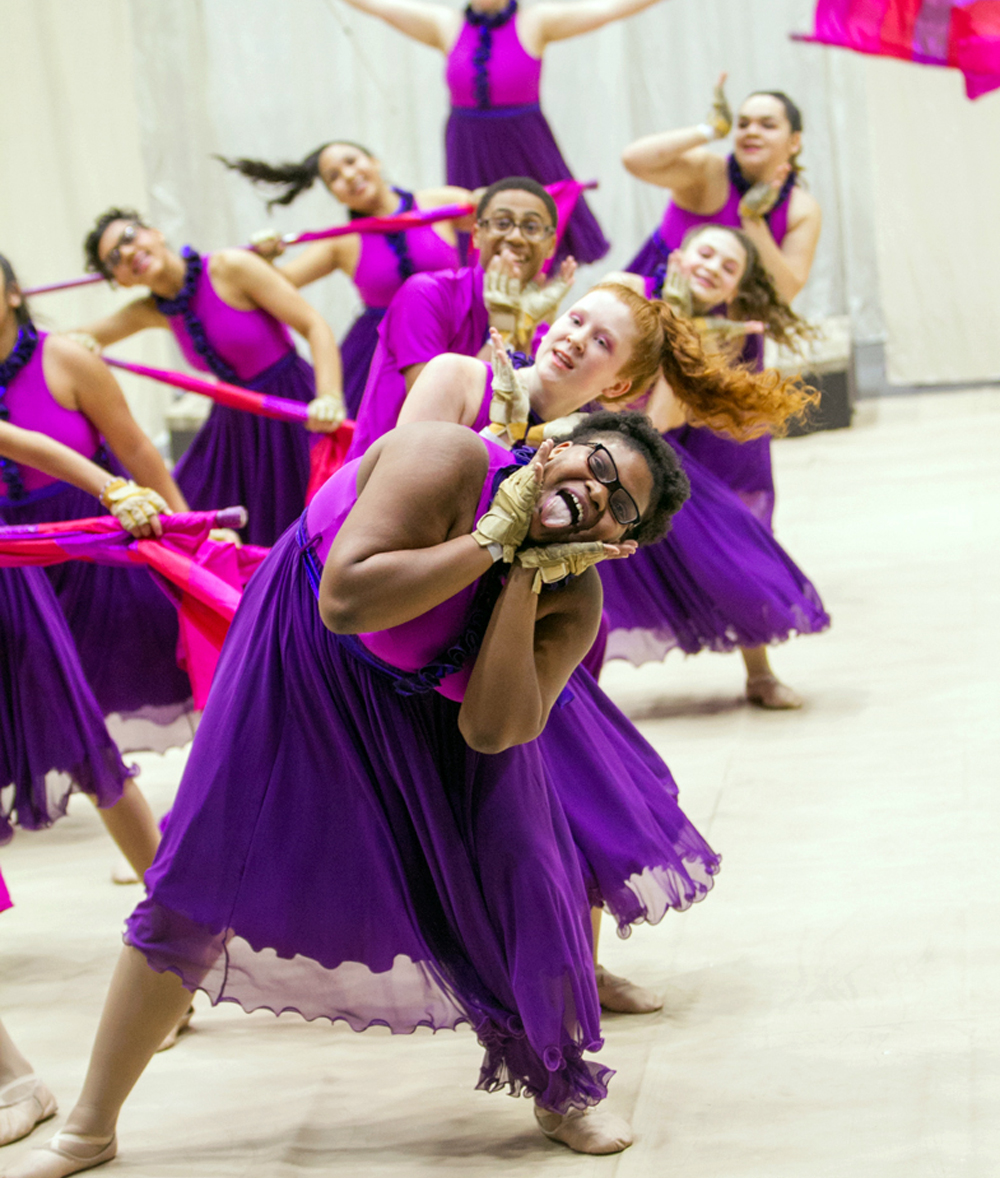 0The History of The SCGC, First Decade 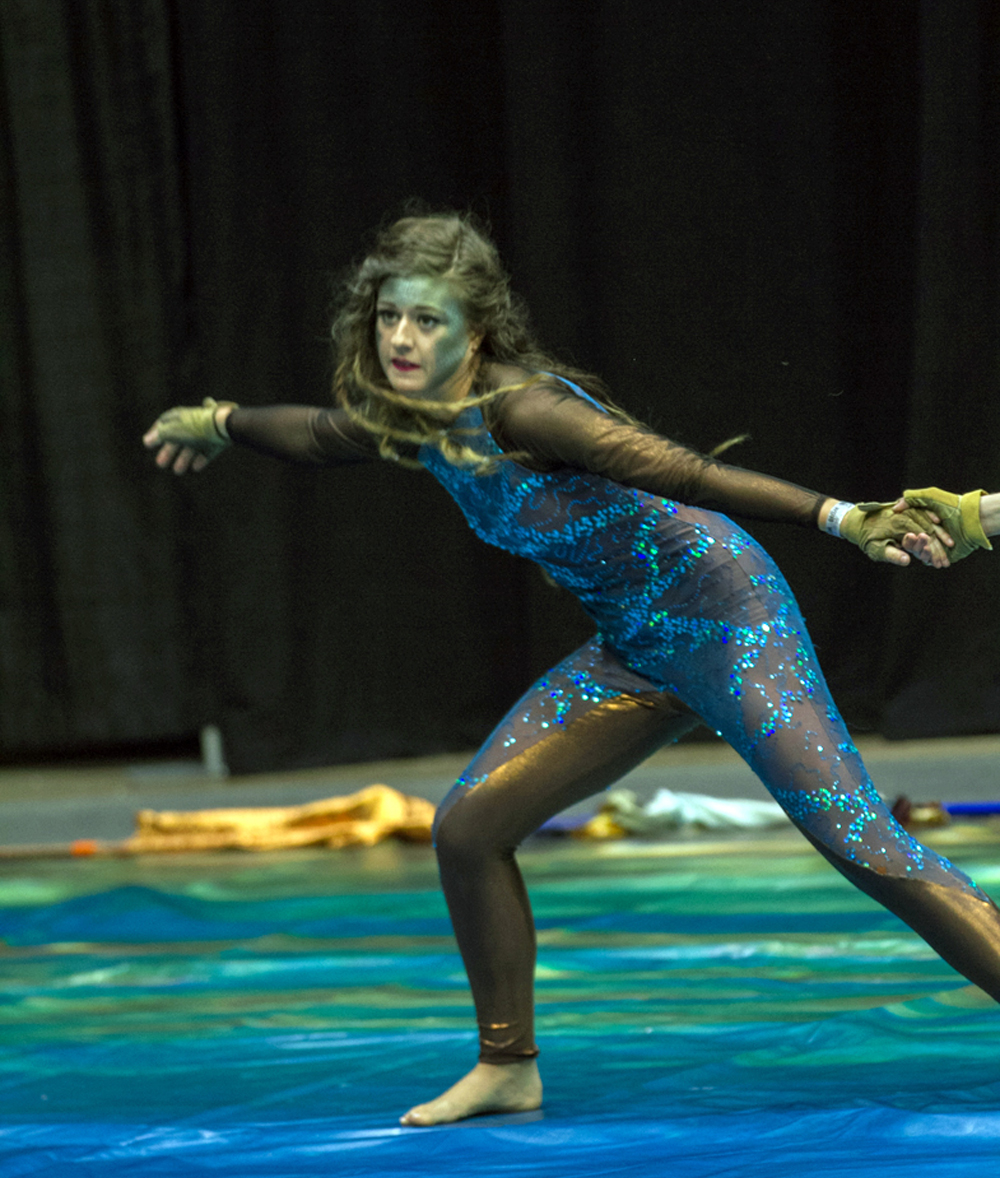 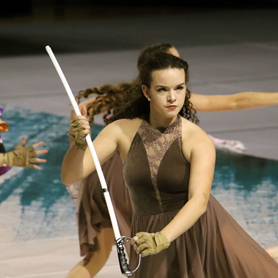 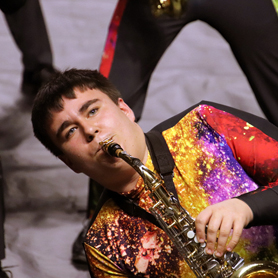 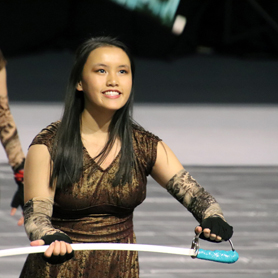 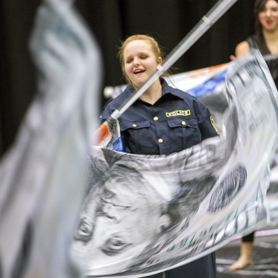 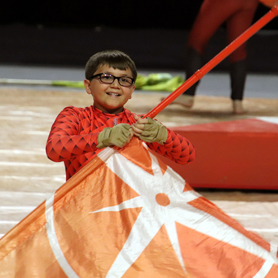 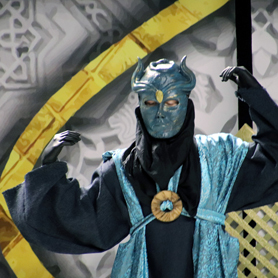 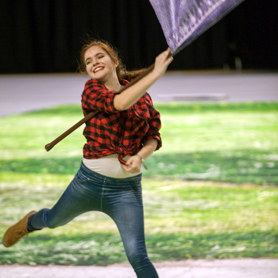